Thankyou for Travelling with Trains

-
0
I was on a train today, then another, and another, and another.
Went from New Milton to London, then descended into London’s tubes to arrive at St.Pancras International, then travelled from there to Nottingham (getting a clear view of my own home town on the way) and then transferred again to get from Nottingham to Alfreton where I was picked up by Meirion who drove us to the Hayes Conference Centre in Swanick.
It’s been a year since I was last here, I still remember my way around. It is a nice place.
So tonight there were only two items on the official schedule, an evening meal and a welcoming meeting. as the video guy, I started by getting the computers ready to fire up onto the big screens in the main conference hall. but then I was taken away to assemble some books in the hub area and I did that knowing that I really needed more time preparing the computers for tonight’s meeting. 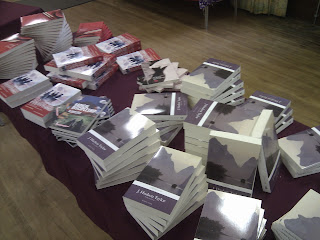 I think I made them look desirable.
Then I went back to the computers, and knowing that I needed more time with them, I was called to help at the reception desk, so I went to do that instead.
After a while I got to go back to the main hall and tinker with the computers, but then it was dinner time – you can tell I was getting annoyed. I was also getting a headache.
At the main meeting everything I did was a mess, I was so unprepared. I should have told somebody that I needed longer to set up the machines and I didn’t. and the worst bit, I don’t have enough time in the day tomorrow to sort it out either.
But the meeting went good, it was nice to see everyone in the big room and there were good speakers and good music, we have a worship band from the CU at the University of East Anglia and they’re really good! We also has Martin from Global Connections MC’ing, and Henry from COCM speaking. After this I sat down for a drink with Phil who was at Next Gen last week and an old friend of mine from De Montfort University, as well as Nick and Priss who are both stewards at the Not One Forgotten conference this weekend, and Suzie who I met at the Inside Out Outside In conference in October and who is also going to China in only 2 weeks time! We had a nice time together. Now I’m going to bed.
See More on the McKlatch.com Blog
53.0725832-1.3911165
Block Placement Books china China Conference De Montfort University Drinks Hayes Conference Centre Inside Out Outside In Next Gen Not One Forgotten Nottingham Preparation Trains
Share on Facebook Share on twitter