-
0
Today we went to Londonderry/Derry (the one I put first is not a reflection on my political views).
There was a breakfast for OMFers and people interested in mission in the far east. it was a good time there were some good talks about mission and updates on the things going on in Japan post-tsunami. I was able to introduce myself to Alison in Japanese which was cool, and she and her husband Graham were both speaking this morning. followed by Steve who did a great illustration on what a missionary needs behind them to get out into the field of unreached people groups.
when breakfast was over I manned the bookstall and then as people were leaving we packed up and were treated to Lunch by Ronald and his wife, they know Ian Coffey, my director of training at Moorlands!
Off topic but the hotel all of this took place at was nice apart from the restrooms, they were bad at restrooms. that’s the White Horse Hotel in Londonderry/Derry – don’t use toilets there.
Before leaving the city went for a wonder around the historic parts, we did a lap of the wall around the old city which stands mostly complete all of the way round, which is nice, I had always wondered if there were any cities with their original walls still present. Having lived in Leicester I had gotten used to the idea that walls just took off and left but were still names streets after the gates which used to be there. there was also a brief stop at the Londonderry/Derry Cathedral. 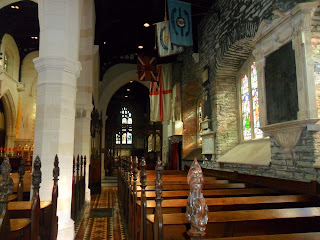 After this we took the scenic route back to Belfast along the coast. we stopped at a few sightseeing areas for… seeing sights.
See More on the McKlatch.com Blog
54.9966124-7.3085748
Books Breakfast Cathedral Foreign Policy Londonderry Mission Missionaries OMF Restrooms Sightseeing Talk Walls
Share on Facebook Share on twitter