-
0
Obscure references are easy to do now, considering how big the world of blogs and podcasting has gotten. but the title refers to Adam and Joe’s impersonation of Cilla Black talking about Blind Date. because it sounds like a whole other thing, a thing which I have been updating all week. 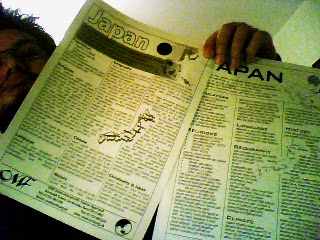 Ignore the face in the background, I don’t know who that is.
I’ve been taking the country profile sheets from OMF for Japan and two other countries and updating the facts and figures because they were blatantly behind the times. but since most of it was being changed I took the liberty of making some cosmetic changes too. I added some new graphics to the headers and better maps as well as justifying the type because it just looks smarter (the leftmost one in the photograph is the one I made). The old ones looked a bit villainous too, like it was a read-this-or-die style font, so I tried to make the whole piece look friendlier too!


My phone also stopped working today so I tried to fix it and made it work less than it was working before. so now it only makes calls and txts and I’m going to have to live this way until I get back to college next week. 🙁


I also did more conference prep work, putting things inside of other things so that people get more things than they expected when yu give those things to them. Tomorrow we’re heading of the other big city in Northern Ireland, Londonderry, or just ‘Darry as the Irish people call it apparently. this will be my forth conference in four weeks. and adding Tuesdays one in Ballymoney I will have hit the five out of five before I return to England!!


Went for a stroll around the Parliament building, looks like a nicer place to run the country than the plaza in Westminster.