-
0
I’m back in Milton Keynes for the weekend, not to suggest that i’ve been her before since the placement began, but i’ve been here before for another OMF event, the Inside Out, Outside In Under 30’s conference. but this i’m here for a different reason… it’s an OMF Under 30’s conference!!! with a different name and aim. it’s called Next Gen and it’s about equipping the current generation of millenials in their future missional lifestyles. So i’m here, i’m being the runner for the team making this weekend happen, anything that they need doing which can be delegated, can be delegated to me. my hands are their hands.
Today was mostly preparation things, we had 34 people slowly arrive over the space between 5 and 9pm. we ate together, and had a time of introductions, worship songs, games, a talk and then another game, which I lead – and am still leading. i’ll tell you more about it tomorrow because i’m tired now. 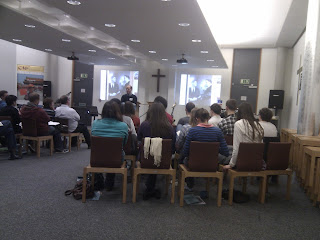 Then chatted with a few people, theres an old friend here from my time at De Montfort University, so that was nice!! we will catch up over this weekend if we get the chance. lots of students, including a large group from Warwick university. lots of people from the last conference returned for this one too.
I’mma sign off now, more to come.
See More on the McKlatch.com Blog
COCM conference De Montfort University games Inside Out Outside In milton keynes Missional Lifestyles Next Gen OMF Runner Under 30's
Share on Facebook Share on twitter