-
0
It actually feels like it went very fast, but we drove to Exeter and back today!
We went out with 3 things to do, after such a long a drive it only makes sense. the first was to meet with a couple who have a significant amount of mission experience behind them, the idea was us to have a casual conversation and for me to be inspired by their history for the benefit of my life as a potential missionary. They weren’t in.
this wasn’t too much a worry however, because this was a casual appointment, and unlike the other two scheduled events this wasn’t to be reported back to the guys at OMF above Andy.
Next we went to see David, who is the pastor of a large church in Exeter of about 400 people, we went through our second survey with him, and this time Andy had me ask David the questions. It went well, some different answers from yesterdays survey, but that’s to be expected from a different church. this church was an Anglican establishment with a handful of mission links all over the world and supporters of several mission organisations. these guys seemed more aware of what facilities a mission organisation has to offer, and were more aligned with my own impression that while a church can share a relational link with a specific missionary, they can delegate care specifics such as visas and advice to a relevant organisation. Anyway, the interview went good and the pastor said that it was “Fun to be quizzed!”
After this we had some time to kill, so I walked up to this house and took a picture: 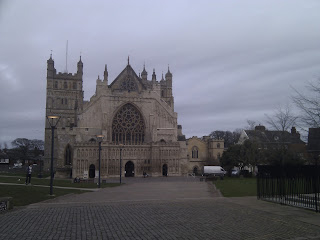 We then went to see a couple who just had a baby and are about to head back to their mission location in Indonesia. I had met Richard before in October at the under 30’s conference – it was nice to him again, and with his wife Zoe and two younglings, the young lad like pepper pig, and something with a gruffalo in it, dont ask me I have no idea. It was good to see Richard and Zoe we had a nice chat about mission and calling and provision as well as general conversation.
I’m tired now, so i’m going to bed. Somerset tomorrow.
See More on the McKlatch.com Blog
50.718412-3.533899
Block Placement Cathedral church Church Leader conference Exeter Gruffalo Inside Out Outside In Mission Net OMF Questionnaire Survey Tired
Share on Facebook Share on twitter